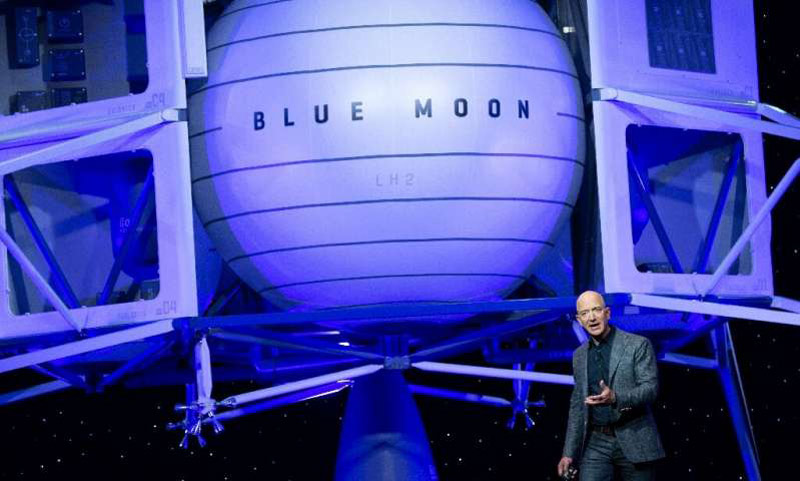 Amazon’s Jeff Bezos has announced his Lunar Lander project that, he says, is equipped to transport scientific equipment to the Moon’s South Pole by the year 2024. Also, carrying humans via self-driving rovers to the Moon is part of the project’s plans.

Along with heading the World’s largest e-commerce company that is Amazon, Jeff Bezos owns the space company, Blue Origin. He, also, mentioned that they have been working on the Lunar project since the previous 3 years.

Bezos was holding a presentation at Washington where he mentioned that his project was called ‘Blue Moon’. More so, there was an exhibit of a large-sized vehicle that was outfitted to carry 4 self-driving rovers.

Further, he mentioned that the project’s goal is to travel to the Moon’s South Pole where there is Ice. Besides, there are efforts to produce hydrogen through the use of water that, in turn, could help in greater exploration of the Solar System.

However, there was no announcement regarding the date of the project’s launch. Though, the Lunar Lander would be ready to take people to the Moon by President Donald Trump’s announced timeline that is the year 2024, according to him.

Additionally, he stated that the project would be completed by the aforesaid timeline only because the project has been developing since the past 3 years. Furthermore, he said that it was time to go to the Moon – this time around to stay.