The Vande Bharat Express Flagged Off: Deemed to be India’s Fastest Train 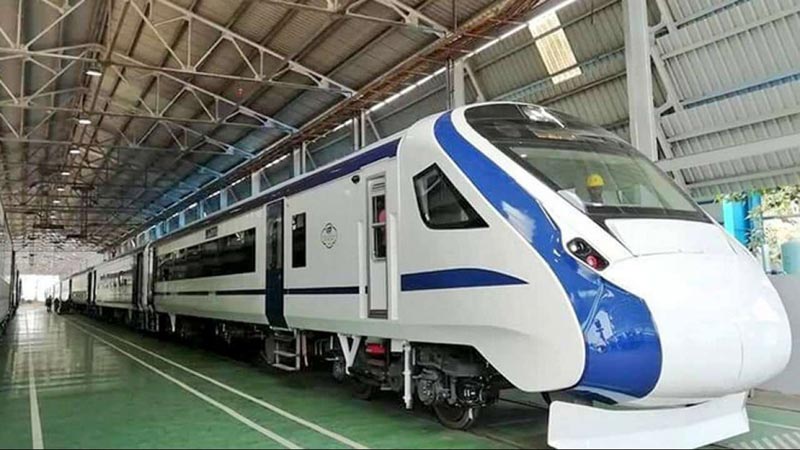 The Vande Bharat Express or Train 18 was launched from New Delhi Railway Station, as a Government of India initiative, on February 15th, 2019. This project comes under the country’s ‘Make in India’ proposal. The Train was proclaimed to be a ‘Semi High Speed’ one, having 3 distinctive features: Service, Safety, and Speed.

In only 18 months, the Integral Coach Factory in Chennai built the Train 18 that is the country’s first engine-less railway train. The cost of the trainset is estimated to be Rs 100 crore per rake, which is approximately half of an imported one.

The train is scheduled to run via two routes: New Delhi-Varanasi and New Delhi-Kanpur-Pragyaraj. Previously, the time taken to cover the 750 km distance between the two cities, New Delhi and Varanasi, would take 11 hours; and now, the travelers can reach their destination in approximately 8 hours. The train’s speed will be 160 kmph; however, it has the ability to run in the range of 180-200 kmph.

The travelers can avail the options of 2 ticket classes, Executive Chair and Chair Car, in the 16-coach and fully air-conditioned Vande Bharat Express. The ticket price for a Chair Car ticket for the route New Delhi to Varanasi is pegged at Rs 1,760 and includes catering fees; the Executive Chair fare is priced at Rs 3310.

The train offers top-line facilities like Wi-Fi connectivity, CCTC camera surveillance, and automatic doors having retractable footsteps. Moreover, the patrons can avail modular toilets that are equipped with bio-vacuum systems, passenger information mechanisms, and rotational seats that are alignable as per your preferences. Sooner or later, the Vande Bharat Express will substitute Shatabdi Express that has been in service for around 30 years.

15 thoughts on “The Vande Bharat Express Flagged Off: Deemed to be India’s Fastest Train”