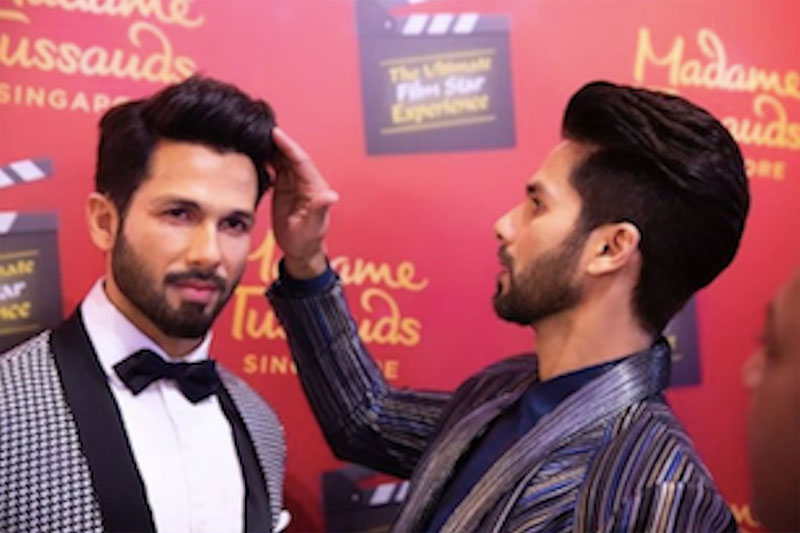 Shahid Kapoor has a huge fan base and his statue at Madame Tussauds was long overdue. Now, finally, he has his waxwork at the Madame Tussauds Wax Museum in Singapore. On 16th May 2019, the actor unveiled his wax statue; his wir Mira Rajput was accompanying him. In his career spanning 16 years, this is his first wax model. During the grand launch, Shahid made sure that he was twinning with his statue. Moreover, he said that he feels ‘blessed’ and ‘special’ to be part of the elite squad who are achievers. Indeed, Shahid’s wax statue seems to be his exact copy to such an extent that it’s hard to differentiate between the two.

Also, he was seen setting the hair of his wax statue and posted a photo of him doing so; his caption read as ‘Baal Sambhaal Munna’.

More so, there was another photo where Shahid was seen taking a selfie with his wax statue. Further, Mira posted a picture of her posing with both Shahid and his wax statue. Her caption reads as ‘Taking mine home but left one for you Madam’. More so, in July 2018, Shahid put up a picture on his Instagram account where he was testing the color his eyes for the Museum’s folks. His photo had the caption ‘Keep an eye out. Coming soon’.

Although, both the couple’s kids, Misha and Zain, traveled to Singapore, the children were not present during the launch. Well, he cited that it would be traumatic for them to see two dads, thus he did not bring them for the launch.

The family was spotted a day earlier at the Mumbai airport as they were leaving for Singapore. Sasha was holding his daughter Misha with him and Mira was carrying 8-month old Zain.

The superstar’s upcoming film ‘Kabir Singh’ that is a remake of the flick ‘Arjun Reddy’ will be releasing soon. Besides, his new release has garnered a great response already. Kiara Advani plays the female lead and his love interest in the film. In fact, people are loving their chemistry in the movie’s trailer. Well, here’s wishing him all the best!