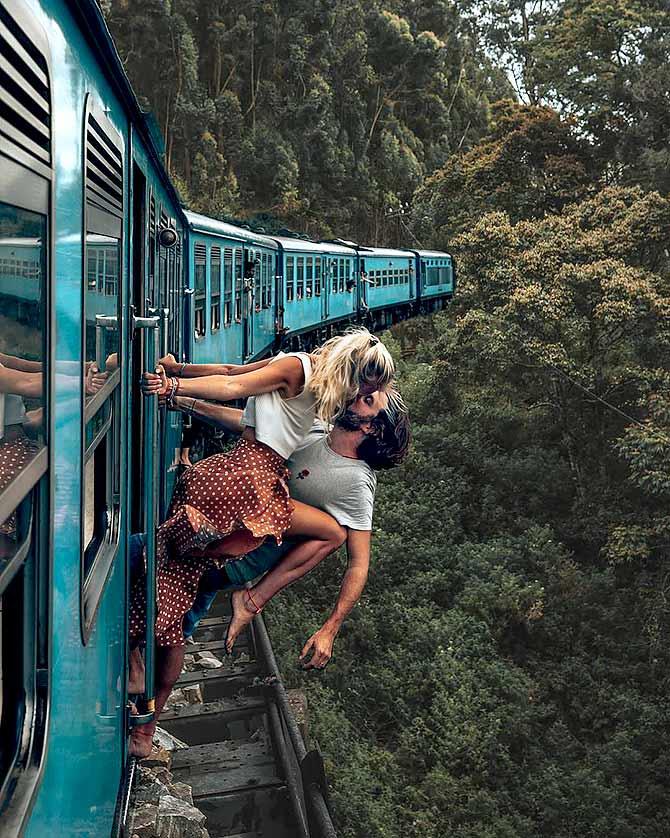 The picture of an Instagram couple, Jean and Camille, hanging out of a moving train is the latest addition in the list of people who take photos in perilous situations. The couple hail from Brussels and are, also, known as “@backpackdiariez”.

In one of their recent photos, they are seen hanging out of a moving train in Sri Lanka. And the photo’s caption reads as ‘one of our wildest kisses’. Besides, they mentioned the moment to be one of ‘Blind Trust’ in each other.

In the picture, the couple is engaged in a steamy kiss. Jean is seen hanging on to a rod of the train. And Camille is leaning out of the carriage with one of her legs raised, as she rests on Jean. If you are wondering who took the photo? Well, that was Camille’s brother, they say.

The social media community has been divided in their responses to the post. Some people have showered praises for the beautiful landscape in the background. And others have slammed the duo for taking risks while encouraging others to try other such risky stunts.

ONE OF OUR WILDEST KISSES 😘 We couldn’t think of a better picture to describe our couple: 1. Blind trust in each other, no matter what 🙈 2. Madly in love ❤️ 3. Always having the need to do something different with our lives 🤷🏻‍♂️ 4. Living on the edge (sometimes a bit too much) 🤕 5. Usually on the run 👣 6. Having fun whenever we can 💃🏼 7. Organized chaos 🌪 What is according to you the most important foundation of a strong couple? #srilanka #srilankatrip #travelcouple #ella #travelbucketlist #travelholic #travelcommunity #wanderlove #loveandwildhearts #dirtybootsandmessyhair #traveltogether #speechlessplaces

Regardless of the backlash, the post garnered over 47,000 likes. More so, as per the couple’s blog, they mention that they quit their London-based corporate jobs to explore the world. Also, in June 2017, they opened their Instagram account while they were in South America for a 5-month sojourn. Since then, they keep posting pictures of their travels on the social media account pages.

Also, they said that, in addition to other freelance work, they have social media collaborations to finance their traveling expeditions.

Several experts opine that people indulge in risky stunts to take selfies to post on their social media accounts because of their need to stand out. They say that there is ‘massive competition’ and uploading ‘dangerous selfies’ is a sure shot way of getting noticed. However, they caution people against indulging in such acts because a considerable percentage of people have lost their lives in their attempts to do so.