Come one, Come all, to the Kumbh Mela! 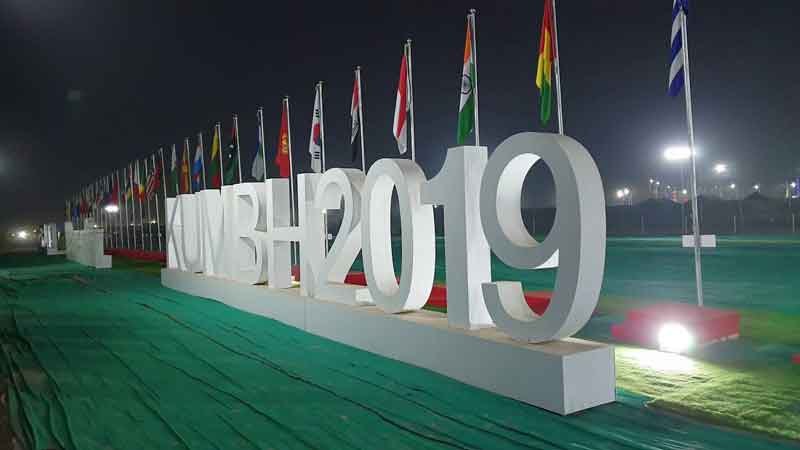 Kumbh (means ‘nectar’) signifies peace and harmony among mankind; and the ‘Kumbh Mela’ or ‘Kumbh Fair’ is the largest gathering of religious devotees around the world. Also, in the year 2017, the UNESCO gave recognition to the ‘Kumbh Mela’ through its addition in the ‘Representative List of Intangible Cultural Heritage of Humanity”.

As part of the festivities, people from various cultures come together to spread the message of peace to humankind. Besides, the members of the Hindu faith take a dip in the sacred or holy waters.

Moreover, during Kumbh, people gather together to be freed from the vicious cycle of life and death and enter the heavenly realm, where they do not suffer. In fact, Kumbh promises ‘an eternal life free of sins’, which is the reason for its raging popularity of the confluence over the centuries.

According to legend, there was an ongoing war between the demigods and demons for acquiring the elixir of eternal life during the mythological times. Supposedly, a few drops of the magic potion fell in 4 places: Nasik, Ujjain, Haridwar, and Prayag. Thus, these sites gained mythological powers.

Moreover, there is a belief that while Lord Vishnu was transporting a pot filled with Amrita (the drink for attaining immortality), there was spillage of few drops that landed in the 4 given sites. Subsequently, the ‘Kumbh Mela’ started being conducted at these places. Periodically, the four fairs are held at any one of the cities on a rotational basis.

In Haridwar and Prayagraj, the ‘Ardh (half) Kumbh’ is conducted every 6 years. However, after every 12 years, the Mela returns to each location as part of the ‘Purna (complete) Kumbh’. Also, after 12 ‘Purna Kumbh Melas’, which means after 144 years, the ‘Maha Kumbh Mela’ is organized at Prayag.

On the basis of zodiac position of the Sun, Moon, and Jupiter, the exact dates of the fairs are determined.

The primary sites of the festival are on the banks of rivers: the Ganga or Ganges at Haridwar; the convergence or Sangam of the rivers Ganga, Jamuna, and Saraswati at Allahabad; at Nashik’s Godavari; and Shipra that lies in Ujjain. If a person bathes in these rivers, they are cleansed of their sins – according to traditional beliefs.

At the Kumbh Melas, holy men from various Hindu sects attend and perform holy rituals. These include Kalpwasis (take bath 3 times in a day), Nagas (are unclothed), and Urdhawavahurs (preach undergoing severe austerities).